An alter table on a MySQL database, takes 10 seconds to execute on a table of 30,000 rows.

How much time will it take on a table that has 80 million rows?

Try and take an educated guess of what the real time would have been?

Scroll down for the answer.

So here goes a real story.

We needed to add a column to this table in one of my projects, and I intuitively assumed, it probably won’t take more than couple of hours.

For somebody who’s been working with large amounts of data, it was a stupid call to take. Even a back of the envelop calculations assuming linear scaling reveals it will take about 8 hours.

One of the biggest thing you learn when dealing with such big numbers ( 100 million is not by any extent a large number these days) is that intuition is really bad at figuring these things. It is the similar to the situation described by George Gamow’s (Hottentots) Tribe, that has only 4 numbers one, two three and many.

Also to remember that a lot of things especially at large numbers do not scale linearly. (Of course I can’t say these of all systems)

This is one of the reasons why I’ve seen a lot of apps that work very well with say 100,000 users fail spectacularly when numbers increase to even 1 million or 50 million.

This graph shows that Couchdb performance seems to get worse especially at the 1 million mark, and even increase steadily afterwards. 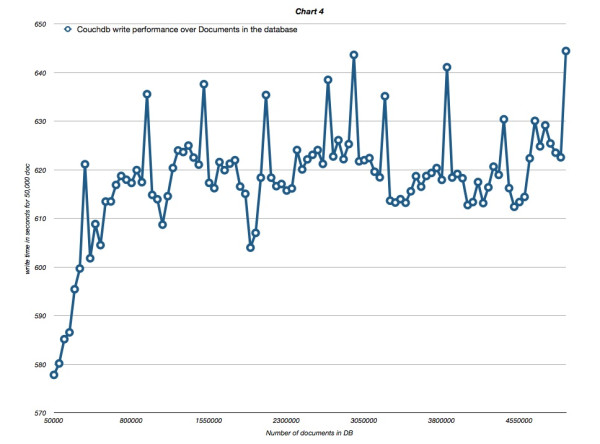 A project that ignored to do this basic benchmarking failed pretty badly to get beyond a few million documents in the database.

The only way you can build this intuition is to do it and figure it out over and over again. There is no replacement for real metrics that use the size and the shape of your data.These sorts of data is not amenable for “Oh! I can do it again” agilistic way of solving problems. Because of the times involved. Most big data problems have to be thought through upfront, otherwise it causes a lot of time wastage and downtime.

In Summary, Discard your intuitive thinking when dealing with large numbers. Create a model with the data similar in shape and size to base your estimates on. Otherwise there is a lot of wasted time and unplanned downtime for your application.

It took 1 day and 16 hours for our alter table to complete. Almost 5 times the estimated time